Into the Malibu House of Malevolence…(part 1)

It was such a fun, pretty house!

Spanish Colonial style, set way back off the end of the narrow twisting road that led to the Pacific Coast Highway. 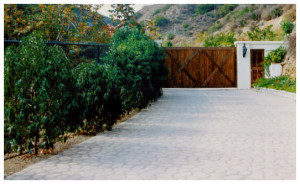 This was Via Escondido, and the house was down a long, gated private driveway. Around the final curve, the drive opened onto a grand stone-paved courtyard. Wide arced steps set with fancy Spanish tiles led up to the heavy wooden door. It was the hand-painted tiles of every shape, size and design that dominated, even overpowered, the whole house.

It was a large home, meant to impress. The architect had designed the imposing entrance to exaggerate the effect. People would arrive at my door and say, “What is this place? A hotel?”

After the chaotic Year of Dislocation in the Pacific Palisades (the town I nicknamed ‘Stepford’), Alex—who was 10—and I were relieved to get away from the spying, police-summoning neighbors, as well as the histrionics that had come with our just-out-of-the-closet houseboy (detailed in “Escape to L.A” chapter in Hit Woman). We were going to start anew in beautiful, rural Malibu: and where better than in this sunlit, seemingly quiet mansion? I’d made the decision to stay in California, to move all my furniture from New York. I would line those wide steps Italian-style with dozens of terra cotta pots filled with flowers of every color. At last, a lovely place to settle down. Little did we know…

There were no visible neighbors. The State Conservancy’s hundreds of acres (complete with a spectacular waterfall about a mile up the trail) abutted the blossom-laden, terraced backyard, all centered around a pretty fountain (tiled to the hilt, of course). Rare for Southern California, a shallow creek ran alongside the property. The house had lain empty for a long while. We couldn’t figure out quite why, but blessed our lucky stars that it had waited for us.

The first order of business was to persuade the insect and rodent population to evacuate the premises. I had a talk with the ants, silverfish and spiders. I was friendly but stern. Our Cornish Rex cat, Shadow, ate the heads off of a few of the hefty Norwegian roof rats. They all listened, cooperated, and left.

I made a few friends in town, and soon began to hear some tales about our new homestead. Wild tales. I—a single mother with a young son—was now living in the house of a major drug dealer  who, after many legendary skirmishes and car chases through the mesquite and scrub oaks behind the property, had died in a hail of bullets. A final firefight with the local authorities. Alex’s elegant bedroom, upstairs at the front of the house, turned out to have been the location of the weighing station. I had wondered why there were so many reinforced locks on the door to his room…

We laughed off the stories, but it was a bit harder to shake the shivers after we found the hidden safe room. Alex and I had been living there for over a year, but the hidey-hole wasn’t discovered until Michael and his four kids had moved in with us. The children had been roughhousing outside and crashed through some of the lattice work surrounding the vine-covered lanai that shaded the back patio. The small space (maybe 6’ X 4’) was invisible from both inside and outside the house (even the cops had missed it). The dirt floor was littered with beer bottles, crushed cigarettes and a few smoked-down blunts.

Then there were the Indian ghosts. One of the vaguer stories had it that the place had been built illicitly over a native burial ground, but since I was renting, I hadn’t given it much thought. Anyway, a local Malibu girlfriend (who had lived in the house a few years before) spoke of the time she had been

taking a jacuzzi in the master bath (garishly tiled, natch) when she opened her eyes to see a half-naked Indian standing by the tub, sorrowfully staring at her as his image slowly dissolved.

We never saw more than fleeting shadows disappearing around corners, usually on the wrought-iron railed walkway that ringed the second floor. That was where we would hear quick footsteps when we were sitting downstairs in the open living or dining rooms.

One response to “Into the Malibu House of Malevolence…(part 1)”