The UFOs and Lake Winnipesaukee

WE STOOD ON THE TOWN DOCKS, my father and I. We were waiting for the mail boat that would take us to my summer music camp out on Melody Island. Bathed in the otherworldly light of a fading red-gold sunset that filled the whole sky, we didn’t speak. We didn’t have to. I was five years old, and my small hand was nestled within his big warm one; ­­­it made me feel safe. 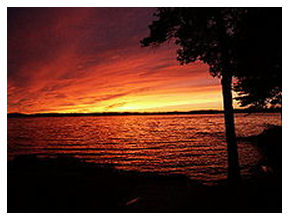 We watched in silence as the little boat chugged toward us, growing from a speck at the edge of the big lake.

The colors disappeared and the darkness grew quickly. I tilted my head back and looked up into the now almost black sky.

He raised his eyes and just stared. His answer came slowly, “Well I don’t know, Sue.” (He was the only person who ever called me “Sue.”)

A few other people had also noticed; now all of us were frozen, eyes fixed upward. We were looking at two orbs of bright light, maybe 50 yards from each other, moving above the lake very slowly, in tandem, parallel to the shoreline. They made no noise at all. To me, they looked like two giant glowing grapefruits.

The year was 1950; we were on the shore of Lake Winnipesaukee—the ‘crown jewel’ of the Lakes Region of New Hampshire—and in the town of Wolfeboro, “The Oldest Summer Resort in the America.” New Hampshire had long been known as a focal point for extra-terrestrial activity. All over the country, from the late ’40’s into the early ‘60s, there was a huge spike in reported sightings, including the yet-to-be-explained Betty and Barney Hill abduction incident. New Mexico may have led the pack with its Roswell, but New Hampshire was always right up there in the top five. And the Lakes Region reported more activity than any other part of the state. My father’s and my experience was written up in the local newspaper, but I didn’t hear anything more about it until many years later.

I was showing a visiting friend the turn-of-the-century Castle In the Clouds, and had paused before a striking aerial map of area. I remarked to my friend how, seen from far above, it’s easy to hypothesize how the Lake, the surrounding mountain ranges and giant caldera could serve as beacons or markers for whoever or whatever we’d seen back in 1950.

I was immediately accosted by an intense little man who had been eavesdropping. He had to know every detail. As I told him about that sunset sighting, his eyes widened, his face paled.  He grabbed my arm.

“Oh my dear, do you have any idea what you saw?!  It was another sighting of the Golden Globes! There were two others around that same time: a famous one in Exeter, and a different one somewhere up North!” He hurried off, mumbling about how he was going to have to write this up…

It’s probably just as well that I was taken by surprise, and didn’t tell him about my family’s other incident (the one I write about in Hit Woman, which ended up with Air Force officers appearing at our door). That didn’t happen until a number of years later, in California. So whatever it was that happened three nights ago, also in California, is not exactly…alien…