“Hey.  Could you get me a cup of coffee?  Cream and sugar, please.” With a wink and a grin, those were the first words spoken to me by John McCurry.

I was producing a spot for J Walter Thompson’s Burger King account in my in-house studio, “Ground Control.”  Chris Palmaro was the arranger; he was working up a fantastic version of the Rolling Stones’ “Start Me Up.” Sammy Merendino was programming the drum tracks; Kevin Halpin was engineering, and John was there to overdub guitars.

I remember smiling and just saying, “I’ll see what I can do.” But Chris freaked. He grabbed John by the arm, pulled him into the waiting area and hissed, “Hey man, that’s the boss lady you just asked to bring you a cup of coffee. Are you fuckin’ nuts?!”

And John became one of my closest friends in the frenetic New York scene of the ‘80s. We worked together, wrote songs together, played hard and raised hell. And we always had each other’s back. Half Irish and half Sicilian with the charm and temper of both, John was at least as funny as many of the leading stand-up comics. His one-liners were priceless. (Robin Williams once told him he had the goods to make it in the biz).

One session, I was struggling unsuccessfully to come with a sound effect for the beauty shot of the product. The two bitchy young women from the ad agency had been whiny and irritating. John finally said, “How about this one?” as he put his index finger into one cheek and pulled it out with a loud “pop!” We were working on a tampon commercial…

Then there was the time at a small Southern airport. We were out on the tarmac when John lit up a cigarette, which caused the airport worker to scream at him. As he stamped out the butt, John ventured, “So I guess a crack pipe is out of the question…?”

Would you believe McCurry started in music as a young accordion virtuoso? I’ve seen pictures — pretty nerdy (but so cute)! Eventually, the wild side took over. He got himself into a heap of trouble and ended up in the hoosegow. John’s good friend, Joe Pezzullo, presented him with an acoustic guitar to take inside with him. So he settled down, taught himself to play— and the rest is pop music history.

McCurry cut quite a figure on both the concert stage and in the studio. He was the lead guitarist for both John Waite and Cyndi Lauper 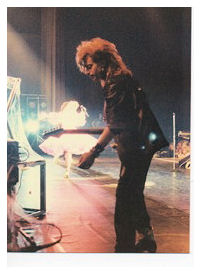 (he also sang the famous duet with her on “Time After Time”). Skinny and taut as a rail, John always wore tight black Lucky Brand jeans and Beatle boots. One eye was blue, the other green (years later I learned that colored contacts helped). But it was his hair that defined him for years: a bright red bouffant “do” rivaled by no one!

At the time I met him, John was the most requested rock guitarist on studio sessions in NYC. He didn’t really read music, but then again, his ears and mind were so quick he really didn’t need to. It was his remarkable feel and groove — his simple but electrifying solos and licks — that made everybody want him. That and the hilarious cracks uttered half under his breath.

Later on, McCurry also introduced me to his best friend, Julian Lennon, at the China Club…