Into the Malibu House of Malevolence…(part 2)

At some point during our last summer in that Malibu house we decided to move. We’d made our peace with the creatures, spirits, etc., but it was time. I was busy writing and producing songs and jingles, with an entire album on the horizon. We found a house just across the canyon that was bigger and better suited for the newly-expanded family (it’s the one we eventually sold to Flea of the Red Hot Chili Peppers). It was only after we’d made the decision that the native wildlife rebelled. They didn’t want us to leave — and certainly didn’t want to have to deal with new, less understanding humans.

They began to act out.

First, Nag and Nagaina decided to raise a family in the backyard. (No they weren’t Indian cobras; they were well-fed native Southern Pacific rattlesnakes). The gardeners killed Nag, and proudly brought me his corpse. That left Nagaina. Naturally, she was pissed.

One morning I followed Maggie, our Airedale puppy, into the kitchen.

The door to the back patio was wide open. Suddenly a terrifying buzzing sound reverberated throughout the room. I thought, “Insects? Hmmm. No. . . Rattlesnake? YES!”  Nagaina was coiled, set to strike, on the mat just outside the door.

I screamed “NO!” at Maggie as she moved in to investigate, grabbed her by the hips and yanked hard as I kicked the door shut. Nagaina’s fangs pinged against the glass.

But she didn’t leave. She stayed on the mat, glaring at us inside. Shaken, I called Michael at work, and he sped home. 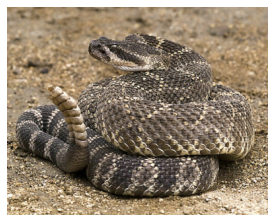 He grabbed a shovel, snuck around back, and when she turned toward him, whacked her head off with it. The still-snapping, severed head, full of venom, almost got him as it shot past his elbow.

Now, I’d read about the rattlesnake round-ups and barbecues they hold annually in Texas, so I thought, “What the hell!  I’ll give it a try.”  I didn’t have a recipe, but had heard ‘it tasted just like chicken,’ so I chose a lemon/mustard/olive oil marinade. First, though, I’d have to gut and skin the thing.

I made the long incision down her belly. To my surprise, I found four or five beautiful large white eggs packed within. I actually felt bad about destroying them. . . Poor Nagaina. She’d only been defending her territory (and avenging the murder of her husband).

I got over it. Lightly grilled, the meat was delicious. The three little boys ate some, but the two girls wouldn’t even look at it. Their loss. . .

That was the end of the snakes, but even worse, the scorpions arrived next. Now, I have an irrational, disproportionate fear of these evil insects (exceeded only by my terror of tsunamis). The scorpion issue dated back to the time in the Mojave Desert when my mother found one of the deadly little ones folded into the blanket my baby sister was lying on.

That’s why when I picked up a pair of Alex’s sweatpants off of the floor only to find one of the little devils scuttling away, I freaked! The next day, there was a tarantula sunning itself on one of the few untiled stucco walls. The ants and spiders returned.

Shadow, tragically, had been carried off by an owl, so the rats were back.

And the lazy little creek overflowed its banks during a sudden rainstorm. Despite desperate damming measures on my part, the ground floor of the house was slowly covered in a couple of inches of sticky, stinky, slimy mud.

It was time to go.

The final kicker: as we were in the process of moving out, a real estate agent took some prospective buyers upstairs. I heard screams and shrieks from the master bath. The biggest scorpion anyone had ever seen had chosen that moment to lounge in the Jacuzzi.

One response to “Into the Malibu House of Malevolence…(part 2)”